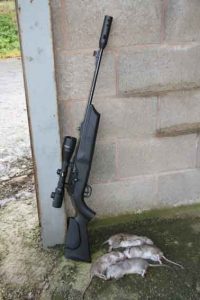 With a Walther optic on board, it’s a combo I used to great success when culling rats and feral pigeons.

When Co2 powered air pistols and rifles came ‘off-ticket’, meaning you no longer needed an FAC (Firearms Certificate) to own and use one, a whole industry devoted to their manufacture seemingly sprang up overnight. A glut of very low powered plinking pistols were launched (or I should say imported into the UK), virtually all chambered to fire standard .177 airgun pellets or steel BB’s. Some even/as they do now have the ability to shoot both.

However, the Co2 power source was always capable of producing power up to the 12ft lb UK legal limit in rifle format. In the States, a few companies and universally custom gunsmiths were producing such rifles, but then a very few companies actually took the trouble to develop this into a multi-shot format to produce rifles suitable for hunting.

The benefits of using Co2 (Carbon Dioxide) as a propellant, results in the rifle having recoilless attributes similar to that of a PCP air rifle and obviously without the need for a cumbersome diver’s bottle or manually operated stirrup type pump to fill. But, the fact of the matter is, that although Co2 has come a long way there are still only a very few notable rifles that use this propellant to produce the required power for hunting.

I first realised a rifle could be used for serious pest control when Umarex launched the original 850 AirMagnum. This was an ambidextrous synthetic stock, bolt action, 8-shot multi-shot that was powered by a removable and renewable 88gramme Co2 ‘AirSource’ canister, cleverly housed and secreted from view by the detachable front section of the forend. 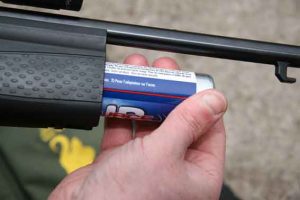 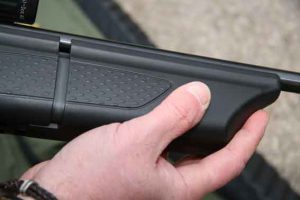 To fit the cannister, the front third section of the stock needs to be removed. For this, there’s a release catch underneath the stock with a slotted catch, which is easily disengaged by pushing in and forward.

Shortly after the full-length version was launched, we then had a dedicated carbine version with an integral silencer, both however used the same and as I’m sure many will now know – familiar, tried and trusted action. 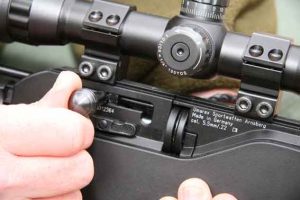 I say this because the 850 action is almost identical to the Walther Rotex RM8 range of PCP’s in respect that it uses an identical layout of side-mounted cocking bolt, 8-shot removable drum shape magazine with slide retaining catch and the trigger has the very same automatic resettable safety button which pops out rearward from the action block every time the action is cycled. 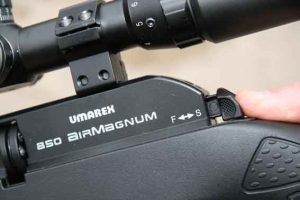 To Be Doubly Safe

It also uses the very same ‘double safety system.’ This requires the slim vertical slide catch positioned on the safety’s outer edge needs pushing downwards and inwards before you can push the main safety button in to fully disengage.

Incidentally, even though the trigger was and is single-stage and adjustable only for length of travel it releases shots predictably and cleanly with no discernible creep.

Also, although the rifle has a basic pair of Hi-Viz fibre optic enhanced open sights, they are still easily capable of kill-zone accuracy out to 12yds. The rifle has a scope rail for fitting a pair of optics and scoped up this is when the gun really begins to shine. I’d usually zero my .22 calibre AirMagnum at 20yds and soon be making sub ½” groups at the set zero.

Stunning performance for what at the time was such a leap forward in the design, function and availability of a Co2 air rifle powerful enough for hunting.

That Was Then This Is Now

Although the original is no longer available, thankfully a newer upgraded version is – that being the Umarex 850 M2. This comes in combo format known as the Empire Kit which includes a Walther 3 – 9 x 40 scope, mounts,  bipod, targets and even a tin of pellets. 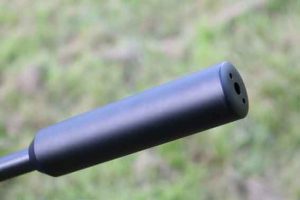 The rifle is available in .177 and .22 calibre, has an even more ergonomic synthetic stock, an adjustable cheekpiece for ease of head-eye-scope alignment plus additional weaver rails along and under slung of the forend for the fitment of accessories. However, besides having a brand-new oversized bolt handle, the rifle itself remains very much the same in operation, form and function. Other major changes from the original are the 8-shot magazine is now aluminium instead of plastic and the original removable vented muzzle break compensator has been replaced by the superb Umarex K3 Neo Silencer that’s already proved itself incredibly efficient when used on any type of air rifle. What’s more – you even get a batch of pellets and targets.

In that respect, this is a rifle I’m sure will be just as/if not even more than capable as its predecessors.

Co2 has certainly come of age and is now a very viable alternative for hunters looking for a rifle that has the benefits of a recoilless PCP without the need to buy a diver’s tank or go for re-fills. Considering you get approximately 140 full power shots per 88g AirSource tank that makes it economical to run and should you prefer there’s even an adaptor available that will let you run it from two 12g Co2 capsules – obviously the larger fill 88g tank is far more economical and by my reckoning helps with the rifle’s highly credible handling and balance.

The two main factors to check are that the Co2 cannister has been pierced properly upon screwing it into the valve housing. After which, I’ve found it takes at least a dozen dry fires to settle in and then by hand – without over-tightening – just ‘nip it up’ again to ensure all is secure. Remember the Airsource cannister is a lot like a buddy bottle on a conventional PCP.

Also – before targeting live quarry, on the day always re-check the zero near the shooting area as temperature can affect the power of a Co2 airgun so it will also affect your set zero.

How To Clean an Air Rifle, Part.2 PCP How To Use The Hills Air Compressor

Air Gun Shooting, How To..., Uncategorised