As featured in Gun Mart Magazine: 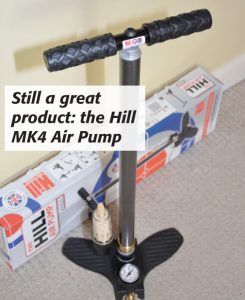 Clever PCP technology comes at a price, as we all know, and any purchase obviously requires associated charging gear. I became a convert of the dedicated airgun pump as opposed to a divers  bottle, since it’s free of safety tests and periodic fills at the diving shop, and is a liberating experience as a result.

Ernest H. Hill is a British company, based in Sheffield, and with a history of designing and manufacturing pumps for all manner of applications, it was inevitable that they would not only enter the airgun market, but have such an impact.

I was a fan of their first designs, and have used one ever since, but what we have here is their very latest MK4 model, and it can’t fail to impress. A hallmark of Hill’s pumps is the solid build, and the new model has lost none of the ultra-robust design so synonymous with the brand. The MK4 will also pump to a maximum pressure of 275-bar, which is impressive. Supplied in a colourful carton, the Dry-pac specified pump is still available at the old price of £185, included Silicone grease and the Dry-pac medium, but one big change is the new pump’s hose- and it’s a massive improvement over the old. It’s six-inches longer for a start, and can take 420-bar, which is comforting to know, but by having thinner walls than the previous spec, it means it’s much more flexible, allowing for easier access around awkward angles and fiddly valve configurations.

Advanced features
The pump can be used, and indeed purchased, without the Dry-pac, but the idea is that the pod acts as a moisture filter; and as such, is highly recommended. Unlike totally dry air from a divers bottle, pumps are prone to some moisture content, as it takes air from the atmosphere; and that’s where Hill’s Dry-pac comes in. Several rival makes have supposed on-board filters of sorts, but they appear a token gesture when seen alongside the Hill design. As air is drawn in, it is passed, firstly through the sintered cap (removing dirt), then through the medium (similar in appearance to mustard seeds), which absorbs around 90% of the moisture present, according to Hill’s own research. The effectiveness of the Dry-pac does rely on the medium being replaced periodically (generally after three- to six-months), which should ensure the pump continues to operate at maximum efficiency. Replacement medium is less than £3 a sachet however, so this route has to make sense.

As for effort required, the new pump reveals an easier valving arrangement, (due to pumping ratio revisions incorporated into the new design) with a totally slack upwards stroke (as the pump draws in air), and an easier downwards (compression) stroke, the result. On a stroke count, my tests showed slightly in favour of the old model; but that’s largely irrelevant, given the ease of use of the new version.

Conclusion
I’m no athlete, but I find these pumps very manageable in use, solidly made, and very reliable. The old Hill pump was good, but this MK4 is just that bit slicker, deserving its place at the top of the pack, and still setting the bar for other makes on the market.

Air Gun Shooting, How To..., Uncategorised