Just when I thought that I’d shot all the pistols in the Umarex catalogue, I noticed the SA9 Operator. It looks like a very modern 9mm service arm with some tasty upgrades to make it stand out from the crowd. It’s fed power from the ubiquitous 12-gramme CO2 capsule, which lives inside the grip, and a 20-shot magazine to carry 4.5mm steel BBs, just like loads of other CO2
pistols out there.

This one differs in the ‘ports’ machined into the slide that show gold plating on the barrel sleeve. This ‘porting’ idea began life in the world of competition semi-automatic handguns where speed is everything, and lightening the slide made it cycle faster. This model is a blow-back, which means that the metal slide cycles back and forth throwing the weight around as the pistol fires. This simulates the recoil of a firearm very well and adds realism to the CO2 experience. 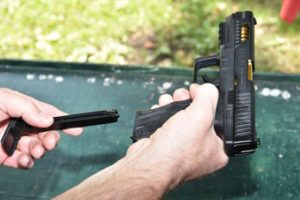 DAO
The action is what Umarex calls a ‘DAO’, which stands for ‘double-action only’. There is no exposed hammer so you cannot cock it manually to offer a single-action option for ultimate accuracy. This gun is based on the kind of pistol that special forces soldiers use in the most extreme conditions when speed and reliability of fire outweigh accuracy.

The synthetic blade simulates the trigger of the superb Glock service pistol with its innovative safety. On the Glock, there’s a slim metal blade that must be depressed before the trigger can be pulled. This adds an extra level of safety so that the pistol can only fire when correctly handled and cannot go off in an accident, such as being dropped. The one on the Operator is only there for looks and has no function, but I liked it all the same.

Fake safety
The safety of the Operator is mounted on the right side of the frame above the trigger and can be operated by the right-handed shooter whilst on aim. When engaged, it disengages the trigger making it very good indeed. I particularly like the ‘last shot slide lock’ feature, which is just the same as a real firearm. As you fire the last shot, the follower in the magazine interrupts the slide
from going forward, clearly signalling to you that you need to reload.

The fixed sights were spot on for me at 6 yards and I got good accuracy straight from the box, both with slow, deliberate shots and rapid fire. I found the trigger a little heavy, but I have some tendon damage in my right arm at the moment, so I might not be best placed to judge.

If you’re looking at something a little different to the rest, or would like to add a little style to your range time, then the SA9 Operator is well worth a look. 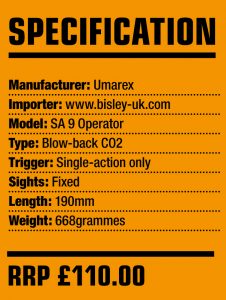 How To Seek and Secure Shooting Permission

→ Follow me
This error message is only visible to WordPress admins