How to clean an airgun

Although ‘live-round’ shooters know the importance of keeping their gun barrels clean, it’s still quite a controversial subject amongst the air rifle fraternity. However, while generally many don’t bother, the Field Target boys certainly know the importance of having a clean tube – some cleaning theirs as frequently as after every 80 – 100 shots!

But the fact of the matter is no ‘gun’ barrel can ever achieve its full accuracy potential if dirty and as a hunter I clean my 12ft lb air rifles after I’ve fired approximately 1000 shots, my FAC rated more frequently. The reason being a pellet travels much faster up the barrel of a hi-powered air rifle and therefore can leave more by way of lead deposits in the rifling.

The First of Two

Before I begin detailing my cleaning regime, I must mention that this is the first of a two-part blog pertaining to barrel cleaning. Reason for this is I’m initially detailing the cleaning of a spring or gas-ram powered air rifle.

Reason for this is that some models of PCP’s have a breech seal just inside the barrel. So, using any brush, mop or a ‘bore snake’ (more on this later) may damage that seal. So, check with the manufacturer of the air rifle or call on a good gunsmith who specialises in airguns for advice. Also, never use the solvents intended for cleaning ‘bullet’ rifles because they’re very corrosive and if allowed to trickle inside a pneumatic air rifle valve or come into contact with any synthetic material will severely damage them.

So, it’s imperative you only ever use a cleaner intended for airgun barrels – please re-read that sentence again! 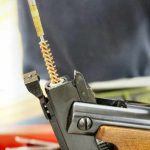 First, scrub the bore with a good quality phosphor bronze brush and rod to loosen up any fragments of lead in the rifling 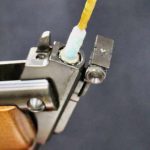 For springers, I favour a combination of methods, the first is to scrub the bore with a good quality phosphor bronze brush and rod to loosen up any fragments of lead in the rifling. If possible (which is only the case with break-barrel action rifles), I do this from breech to muzzle, so the muck is being pushed outwards. Then before beginning pulling the bore through using the ‘patches ‘n’ pull through’ method I move on to the ‘mop.’

A mop is a head attachment for the cleaning rod that has a synthetic wool-like outer – this I spray sparingly with airgun barrel oil and insert (again from the breech if possible) to gather up all the loose particles of lead. Mops can also be used ‘un-treated’ (with oil) to remove any excess cleaning fluid in the barrel. 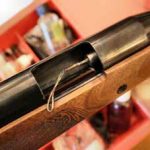 Then I go on to use the ‘patch ‘n’ pull through method. For this, I prefer to use Napier’s POWER pull through kit (Check out the company’s website as there’s a very useful instructional video that shows how best to use it.) It’s a simple procedure whereby you keep replacing the patches until when run through from breech to muzzle, new patches finally appear lead free. As you can see by the photos. The cable of the pull through is passed down the rifle until the end loop appears at the open breech. Then a cleaning patch is passed through the loop and folded over on itself.

An important factor to note is that great care needs to be taken not to allow the pull through cable to rub against the sides of the muzzle crown as you draw the cleaning patch up and out of the barrel. If you do – it can cause irreparable damage. 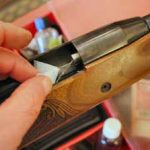 Eye of a Needle

Now on certain rifles, getting the pull through cable down the tube can be tricky. Especially those with barrel shrouds containing baffles towards the end or full perma-fix moderator. Obviously, if it’s a screw on model, just remove it and clean the barrel, but if it’s a push fit silencer held in place with a grub screw, these can sometimes be quite difficult to remove particularly on older models. If it’s a rifle that has a silencer actually bonded onto the end of the tube, then it’s impossible to remove! So how can you overcome this problem? 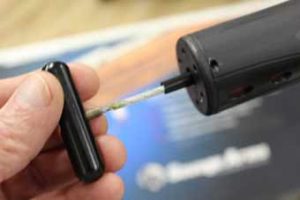 Well, a simple little tip is to insert an ordinary plastic drinking straw into the front of the silencer until you feel it ‘bottom out’ (come up against resistance), as it touches the muzzle or ‘crown’ of the barrel. Then place the pull-through wire into the now protruding straws ‘hole’ and feed it in until it shows at the breech loading area. Then fit with a clean patch and pull through as per usual. On exiting the barrel, the patch catches on the drinking straw and hey presto – all come out of the silencer together. 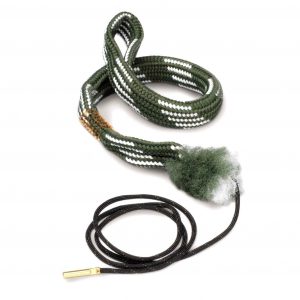 If you feel the need of a quick clean in the field a handy piece of kit to use especially for a mechanical action rifle is a Bore Snake made by Hoppe’s. It consists of a long nylon cord with phosphor bronze bristles impregnated along most of its length and a ‘wick’ directly behind it thus cleaning the muck out of the barrel as it’s pulled through. And when it’s dirty you simply throw it in some soapy water to clean.