The following review was featured in Air Gunner Magazine, March 2018: 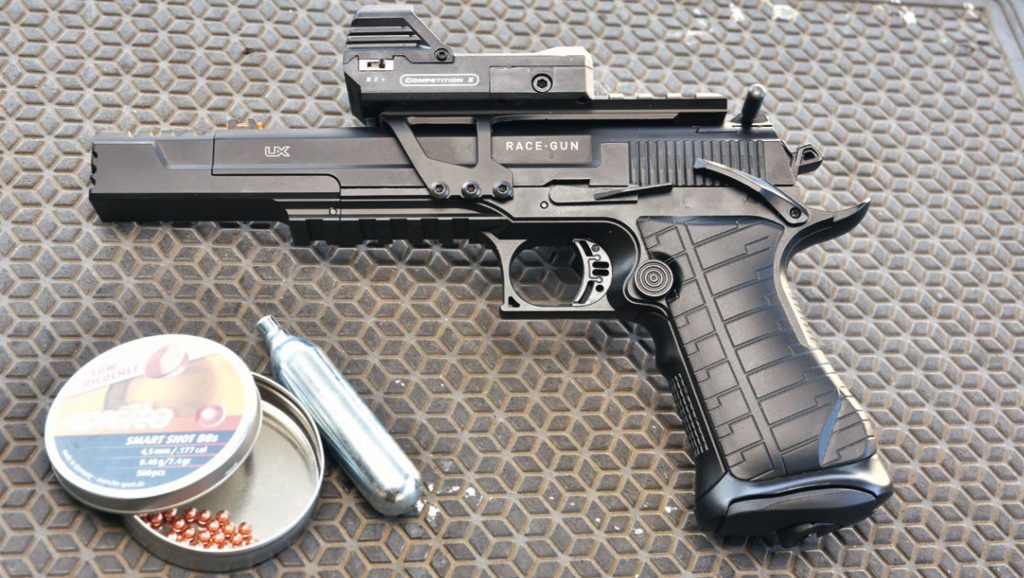 A couple of years ago, I was competing in a superb adrenalin-fuelled sport – IPAS or Iron Plate Action Shooting, where competitors shot steel plates as fast as they could against the clock. The maxim was ‘shoot fast … but don’t miss’ and I loved it. Most people chose to shoot the ubiquitous CO2 8-shot rotary magazine pistols because lead pellets were mandatory; steel BBs will bounce back with ferocious velocity, which is downright dangerous. Like a few others, I experimented with 6mm airsoft guns, but they lacked the accuracy and power to clang the steel plates loudly enough for the range office to score you properly.

The 6mm pistol I was using was the dreamy UX Race Gun that copies full-bore action competition pistols in that the ergonomics are fully developed to help us to shoot quickly with full control. All the levers and buttons are extended so that they can be reached from the shooting hold, and the shape of the grip fills the hand perfectly, adding control during fast-fire sequences. It really does fit like a glove. Further, it comes drilled and tapped to accept a bridge-style Weaver rail that will carry any type of red-dot or holographic sight you might choose. 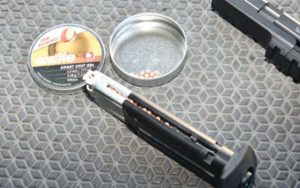 The lightweight 6mm ammo never did find acceptance during my time in the sport, and most people stuck with pellet-firing Umarex pistols, but a recent innovation that I’ve been enjoying has encouraged me to try this delicious pistol again. Alongside the 6mm airsoft ammo version, Umarex always offered a 4.5mm BB-firing model. There is now a good supply of 4.5mm copper-coated lead BBs, manufactured to a very high standard, that work flawlessly in place of the steel and I wanted to know if my dream gun would digest them as well as all the other guns I’ve tried.

The great advantage of these pellets is that they flatten and disperse their energy just like a traditional lead pellet, hugely reducing the chance of ricochets and rebounds. I’ve shot enough to have confidence in them, so now was the time to try. I filled the magazine that holds both the pellets and the 12 gramme CO2 capsule and pressed it firmly into the magazine well. Like every detail of this pistol, the mag’ well has been modified for speed. At its base it has wide flares that help to guide the mag’ in, reducing the chance of snagging and losing time during a reload. 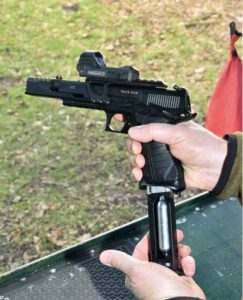 Superb control
Once loaded, I racked the slide and then pressed down on the huge, ambidextrous safety lever, so that the gun was now cocked and loaded. This is just like handling a firearm, which adds greatly to the experience for me. Because the slide is covered in part by the sight bridge, Umarex added an extension bar that allows you to engage the slide in an instant.

On top of the bridge, I fitted the Competition II holographic sight included in the set, that I know very well. The dot you see is green and has two levels of brightness, which is very important. On a bright, sunny day some dots are too dim to acquire, but this one served me well in all weathers, so I know it will do the same for you.

Because the slide cocks the hammer on each shot, you have a true, single-action trigger that’s short and light in its action. This makes a huge difference for fast-fire sequences because the less you need to move your trigger finger, the less you move off target, making accurate shooting that much easier.

Many competitors simply shot the Umarex pistols straight from the box, or employed gunsmiths to make the modifications you see already done on the Racegun, but even modified to the maximum, they were still eight-shot guns. The Racegun holds 21 BBs which is a huge advantage and I’ll explain why.

All about the shot count
Most courses of fire involve five plates, and if you shoot accurately, eight-shots are plenty. However, once you miss a plate ‘topping up’ can get messy and I saw many competitors miss again and again, so their three spare shots were soon gone. A reload takes just too long and you’re pretty much out of the competition. That’s not going to happen with the Racegun – 16 top-up shots
must be enough for anybody. 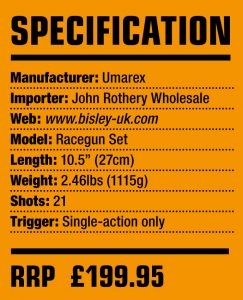 For me, these pellets add a new lease of life to this already superb gun, which makes me think of competing again. With no modifications at all, this pistol would be competitive and perhaps have an advantage over modified eight-shot guns. For non-competitors it’s simply a lovely thing to shoot, either as a simple plinker or rapid-fire can blaster, and the icing on the cake is that despite all its advanced features it’s not expensive either. There’s nothing else like this on the market and if speed is your thing, you need a good look at this superb pistol.