The ring on the door was the postman, with a parcel, for me. Woohoo!

This was my new Umarex Smith & Wesson model M29 6 ½”. I unwrapped the parcel and eased the box open and there she was in that gorgeous finish that defies a colour description but is a sort of bluey, greyish shiny effect that changes colour as the light and your perspective moves. But…Oh dear! on lifting the bubble wrap the shine was there but with a lot of fingerprints all over it.

I reached for a nearby duster and gave it a wipe. Better but they were still there. In fact, some were quite stubborn and needed a bit of effort to polish off. Then, I noticed fingerprints reappearing, MY fingerprints. This won’t do. Another UBC member had suggested clear shoe polish as a protective measure after reading about renaissance wax. I didn’t have either but I did have Bison wax, a good quality furniture wax. The duster I had used had beeswax on it and while this gave a lustrous shine it didn’t help at all with fingerprints. So, let’s try the bison wax. I cleaned off all the beeswax with isopropyl alcohol and applied a generous coat of bison wax and left it to dry for a while. A lot of polishing later (I’d put too much wax on) the shine was back and deeper than before. Disappointingly I was still leaving finger-marks far too easily on the finish, but at least they were now coming off with a quick wipe.

Fast forward two days and I got the M29 out again to see how it looked. The shine was still there, as bright as ever. I poked and prodded it a few times and the tendency to mark the finish was massively reduced. I think this is down to the wax having hardened in the intervening two days. 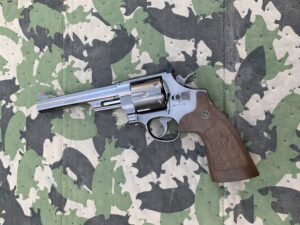 So there you have it. If you want to maintain that super shine, give it a coat of wax, I guess any good quality wax will do, polish well, and leave for a day or two to harden and you will have a shine much less prone to marking. It still marks, but they are much less noticeable and easily wipe off with a clean cloth. When it comes to shiny, if you’ve got it, flaunt it.