JRW_Claire Air Gun Shooting, How To..., Uncategorised air gun, air rifle, Airgun, Airguns, how to, how to clean an air rifle 0

Previously I explained why you should clean an air rifle barrel and how I go about doing it. However, that was very much, (almost totally) slanted towards the cleaning of a springer’s tube. Reason being not only does the rifling pick up tiny amounts of lead deposits from ammo that can eventually affect accuracy, but a springer can also eject an amount of unburned and burnt (if the springer is one that is dieseling) lubricant down the tube on discharge. So cleaning is, in my opinion, a very wise option.

Not As Cut & Dried

In relation to a PCP the matter isn’t as cut ‘n’ dried, but it is one that should be undertaken when accuracy is becoming affected. However, there is a case to say that for the lead that gets built up, other pellets following down the tube can take it away and the barrel, although becoming discoloured due to dirty lead beginning to leave a slight ‘lead’ lining inside the bore can take far longer to show lead build up as a problem. However, when it is required the cleaning regime doesn’t need to be as stringent or as invasive as for a springer’s tube. Also, another consideration for cleaning pertaining to the maintenance of a PCP is due to it being powered by compressed air – even the very slightest moisture content can create internal condensation which over time, if left unchecked and especially if the rifle is left unused for quite a while, will cause the formation of rust. 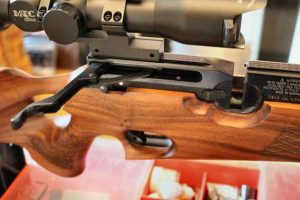 With the rifle securely on a maintenance centre remove the silencer, cock the action and engage the trigger safety – this gives you unhindered access to the breech

The cleaning of a PCP’s barrel is a far trickier affair because unless you intend to only use a pull-thru and/or felt cleaning pellets (more on these later) whatever ‘other kit’ you use obviously can only enter and travel from muzzle to breech.

So once the rifle is set on a maintenance centre – my preference being the model made by MTM – is to first remove the silencer (if fitted) then cock the rifle so you’re able to remove the magazine (if it’s a multi-shot rifle) but obviously this also needs to be done to retract the loading probe so you have an exposed open breech. So, with the cocking bolt or side-lever open and of course ensuring you engage the rifle’s trigger safety you can then begin the following procedure. 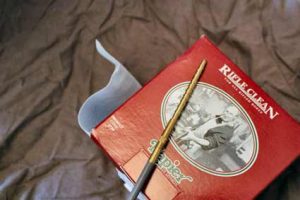 If the barrel is really dirty use as a jag ‘wrapped’ in a suitable material such as Napier Rifle Clean.

Instead of starting by using a phosphor bronze wire brush, if the barrel is really dirty, I’ll replace this first operation by using what is known as a jag ‘wrapped’ in a suitable material such as Napier Rifle Clean. This is liberally coated with a cleaning solution such as Napier Power Airgun Oil and carefully fed down the barrel from the muzzle until only the very tip can be seen at the entrance to the breech. Then I pull it back through the barrel towards the muzzle while every so often pushing it inwards then back again to carefully scrub what debris there is from the rifling and bore. 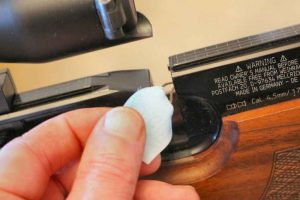 This operation is then followed by using a pull-thru as per norm and as fully detailed in my previous springer blog. However, to recap, this means carefully inserting the end of the pull-thru down the barrel from the muzzle until the loop appears at the breech. Now you can fold over a cleaning patch, so it’s held in the loop and once again – note – great care needs to be taken to not to let the pull-thru cable rub against the muzzle crown as you draw the cleaning patch up and out of the barrel.

Eventually patches will begin to come out clean. After this – and this can be done if you wish with a springer – fire a few pellets through the barrel to begin the ‘leading up’ process. I know this sounds like a contradiction for the reason you’re cleaning the barrel in the first place but depending on barrel type – accuracy will only be restored back to its optimum level once this has effectively been done and for some models of any air rifle this can take up to approximately 40-50 shots from clean. 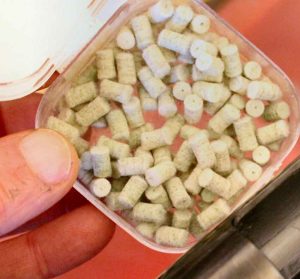 Time For Another Quickie?

For a quick clean in the field and these are as useful for mechanical action guns but especially PCP’s then I recommend using VFG Felt Cleaning Pellets.

Manufactured from pure wool and other natural fibres, they come in different densities and available in small or larger sizes to suit the bore of the gun to be cleaned. Very useful for a quick clean in-between a full cleaning regime – a tip if ‘shooting them through’ is to place a normal lead pellet behind the felt one as for some reason they don’t always fully expand into the barrel, therefore, causing what is known as a ‘dry fire.’

Also using a pellet in this way to force the ‘soft cleaning slug’ down the barrel will also ensure it clears a perma-fix silencer. If unsure though – don’t do it!

How To Clean an Air Rifle, Part.1 Springer Co2 Power for Pest Control?