Though first and foremost an airgun hunter, I’ve done my fair share of live round fox shooting. This is when I first learned the importance and usefulness of shooting sticks.

It wasn’t long before I realised my airgun hunting would also benefit from having an ‘easy to carry’ gun rest available. Reason being, you’re not always able to drop down into the prone shooting position to deploy a standard gun mounted bipod or find a suitable area to rest the rifle on for a stable shot. 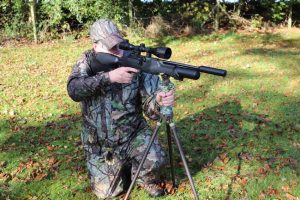 Shooting Sticks have been around for many a moon, they first originated from basic homemade versions made out of lengths of wood then as shooting accessory companies took notice producers manufactured various types in height adjustable configurations. Generally they’re available in three major configurations – single leg (monopod), double or twin leg (bipod) and the more stable three leg (tripod) option.

The sticks are configured to be height adjustable, have rubber feet or ground spikes at the bottom and at the top where they meet there’s a ‘V’ – shape rest (yoke) for the rifle forend to be rested in. 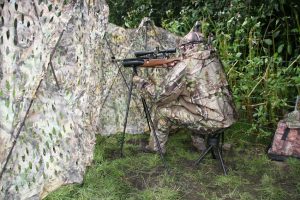 I first began to use ‘sticks’ while ensconced in a hide waiting up near an area well used by rabbits or in position within range of a bait dropped out to attract corvids. In conjunction with a small hide chair I’d position the sticks (more often a tripod) in front of my seated position with the air rifle already sitting/rested on the yoke so as to be ready for when your target comes within range. Then it was just a matter of sighting through the scope and with minimal movement of the rifle place a pellet precisely into the kill zone. 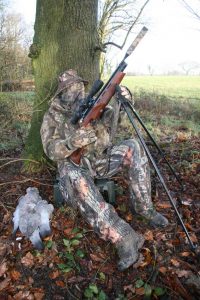 Another seated option is to use sticks for targeting woodies and other avian pest species in the trees or when roost shooting. You can use two-leg sticks and shoot from an open position but ensure you have a good field of view, are wearing full camo and use a large tree trunk as a backdrop to disguise/hide your profile. In this instance, the rifle forend will again be already rested in the yoke but pointed at an upward angle in the general area the birds are expected to alight. Adjusting aim takes a minimum of movement and shooting in this manner allows you to pull the sticks back towards you to raise your aim and push them forward to slightly lower it. A much better proposition than having to continually raise and lower your rifle when a shot presents itself.

Now while most shooting sticks require both hands to set the desired height, not so the Primos Trigger Sticks Gen3 Tall Tripod. Their user-friendly nature allows you to adjust overall height by using just one hand. This is due to the top of the sticks incorporating a trigger lock system which is operated by an easy reach ABS/rubberised handle.

When this is activated all three legs are free to move within their individual tubular frames. On releasing the ‘trigger’ the anodised aluminium legs lock up solid, but the V-yoke head is still able to fully rotate should you need to pan around. They have a height range of 24” – 62” which enables shots to be taken seated to standing, however this is also furthered by the legs being able to be set at extreme angles due to what is termed the ‘extreme leg angle lock’. 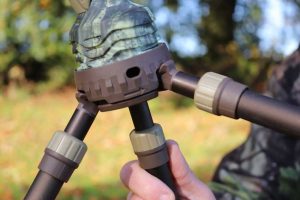 The new design locking collar (found directly above the legs) controls how far the legs can be splayed out. In the pre-set location the collar allows the legs to be spread out far enough to form a rock-solid tripod for a kneeling or standing shot. If you want the sticks to go lower, then the locking collar needs to be twisted/rotated anticlockwise which allows the lugs at the top of the legs to insert into idents in the collar resulting in them spreading out at a far greater angle. Also, the length of each leg can be altered independently to create a stable platform to shoot off even on the most uneven of surfaces.

The sticks also now include a locking switch for added security when changing heads. This new Quick Detach Yoke System makes it very easy to change the V-shape yoke gun use over to the dedicated optics adaptor supplied. This requires disengaging a lever switch on the left of the head, then pressing in the serrated block shape button on the opposite side. This then releases the V-yoke and allows the ‘optics adaptor’ to be installed which beforehand should be screwed into the camera or optic/spotting scope of choice. When in place it allows for a very smooth panning action. 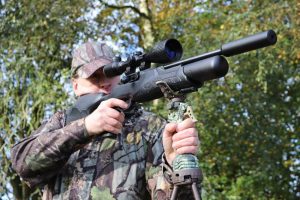 A tip when using any type of shooting stick is to slightly lean into the rifle for extra stability at the shoulder. However, don’t strangle the rifle in your hold which leads me to mention sticks can even be used if you have a recoiling mechanical action rifle such as a springer or gas-ram. In this instance use the leading hand to hold the forend underneath cushioning it from the sticks you are rested on.

Shooting sticks can also help when crossing boggy ground as they come in handy to test how waterlogged and deep an area is until you venture into it. Alternatively, use it as a ‘third leg’ for helping you walk uphill, not only does it help take some strain of the upper torso, but it also helps you keep your footing.